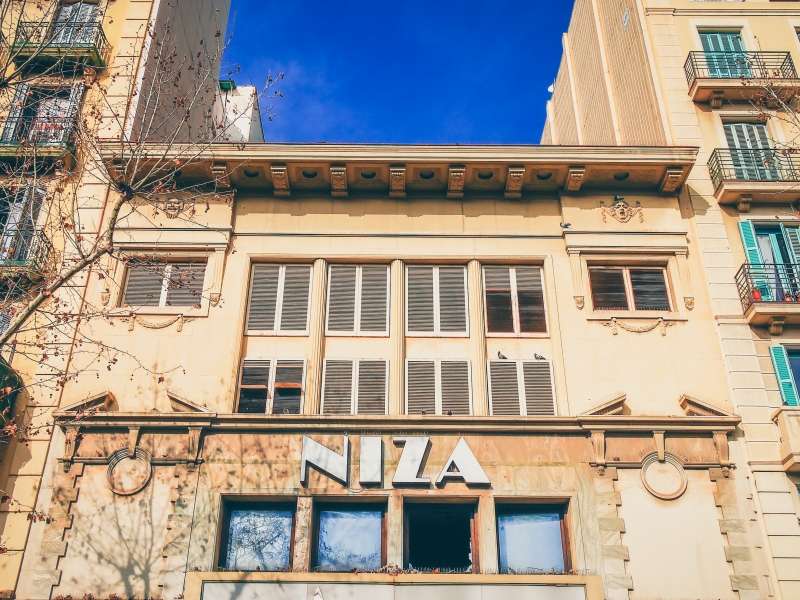 The old “Cinema Niza” was one of the leisure reference points in Barcelona, located in Sagrada Familia Square, and it opened in 1946.Its spaciousness made the Cinema Niza one of the greatest premiere cinemas in Barcelona. The neighbours were not able to stop the demolition of the historic Cinema Niza, one of the most popular leisure attractions in the city, nowadays, the cinema is closed and the space remains shut down.

In 1946, Plaça de la Sagrada Família received a new guest: Cinema Niza. The cinematographic businessman Luís Cabezas - owner of other pictures theatres in Barcelona like the Montecarlo cinema - commissioned the architects José María Aixelà and Miguel Ángel Tàrrega to build a neoclassical building of big dimensions with a great capacity. Thus, the number 11 became one of the reference movie theatres in Barcelona, with the first release of “It Ain’t Hay” by Abbot and Costello.

Just two years after the inauguration, an emblematic dance hall and the games area were inaugurated too- with billiards and table football. And although during the fifties it was specialized in premieres, in 1967 the cinema returned to its origins of the re-release. In addition, Niza was also the venue for the PSUC and the PSC during the Transition.

Years later, during the eighties, the management of the cinemas was transferred to Pere Balañà, who allocated a considerable investment to restore them as release cinemas. But the lack of agreements between the entrepreneur and the owners of the property led to the final closure on February 21, 2005, with the screening of Clint Eastwood's movie “Million Dollar Baby”. In spite of the neighbourhood opposition to building a new commercial area, the demolition of the property began in February of this year 2018, breaking down the desired project of the Sagrada Família Athenaeum.